On completion of the Complementary Safety Assessment (CAS) process engaged further to its decisions of 5 May 2011, ASN will present its conclusions on these CAS at the beginning of 2012.

To analyse the reports submitted by the licensees on 15 September 2011, ASN called upon the expertise of its technical support organization, the IRSN (French Institute for Radiation Protection and Nuclear Safety), which handed over its report in early November.

On 8, 9 and 10 November, ASN called a meeting of the Advisory Committees of Experts for Laboratories and Plants, and these committees notified ASN of their opinions, dated 10 November.

Alongside this, ASN invited the HCTISN (High Committee for Transparency and Information on Nuclear Safety), the CLIs (Local Information Committees), and several foreign nuclear regulatory bodies to take part in the process. The national association of CLIs (Ancli) mandated experts to examine the reports submitted to ASN by the licensees on 15 September. The CLIs undertook various analyses: the Fessenheim CLIS submitted a study of the flood risk at the Fessenheim nuclear power plant (NPP) to ASN in June, while the CLIs of Golfech, Civaux, La Hague and Flamanville communicated analyses of the CSA reports. 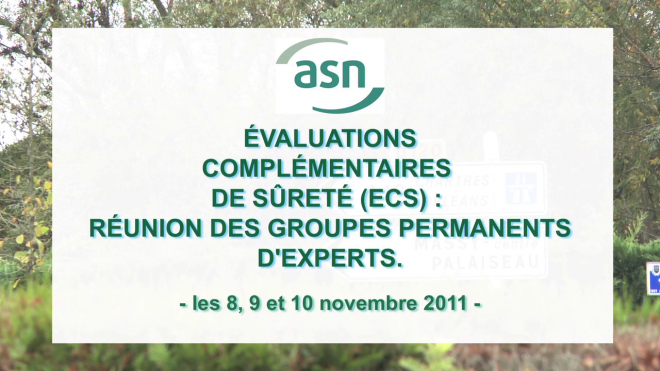 The complementary safety assessments were undertaken by ASN further to the accident that hit the Fukushima Daiichi NPP in Japan in March 2011. This initiative also meets the Prime Minister's demand that the French nuclear installations be subject to a safety audit, and the European Council's March 2011 requirement for “stress tests” to be conducted on the European nuclear reactors.

The complementary safety assessments focus on the robustness of the installations in exceptional situations like those that caused the Fukushima accident. They concern all the 150 nuclear facilities in France, and complement the continuous safety actions conducted on the installations.

Between June and October 2011, ASN conducted a targeted inspection campaign on aspects related to the Fukushima accident. This involved inspecting 38 specific points on all the priority nuclear installations to check the conformity of the equipment and the licensees' organization with respect to the existing safety requirements, and represented 110 on-site inspection days. The follow-up letters to these inspections are, or will soon be, published on www.asn.fr.

ASN invited the HCTISN, the CLIs and the experts from the German, Belgian, Luxembourg and Swiss nuclear regulatory bodies to attend its inspections, with the result that almost 100 people participated in them.

The next step in the process

On the basis of the expert appraisals, opinions and its own inspections, ASN will develop its conclusions on the complementary safety assessments, communicate them to the Prime Minister and make them public at the beginning of 2012. ASN will impose the appropriate requirements, and even, where necessary, recommend to the government the shutting down of any installations that do not meet the required safety standards.

Pursuant to the decisions of the European Council of March 2011, France will communicate its report to the European Commission. The reports from the European countries will be subject to a peer review that will start as of January 2012 and should be completed in June 2012.

ASN underlines that the experience feedback from the Fukushima accident will be a long process, of which the complementary safety assessments constitute a first step.