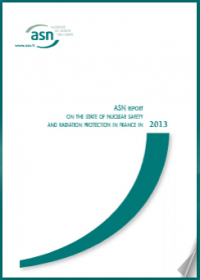 The ASN (Nuclear Safety Authority) Report on the state of nuclear safety and radiation protection in France in 2013.

This report is specified in Article L. 592.31 of the Environment Code.

It was submitted to the President of the Republic, the Prime Minister and the Presidents of the Senate and the National Assembly, pursuant to the above-mentioned Article.


In 2013, ASN actively continued its regulation and oversight of nuclear safety and radiation protection. 2013 is on the whole in line with previous years and ASN identified no new major problems. The number of incidents notified remained stable. From this viewpoint, the current situation is on the whole relatively satisfactory.

This should not however let us forget that events with very large scale consequences, such as those of Fukushima and Épinal, can nonetheless occur. The persistence of significant incidents means that vigilance must be maintained with regard to a severe accident, which always remains a possibility.

Forward planning is necessary for nuclear safety and radiation protection

But, and above all, this observation must not mask the importance of the forthcoming crucial choices for nuclear safety and radiation protection. In the near future, key decisions will need to be taken concerning the continued operation of the NPP reactors, the management of a nuclear accident in Europe, the plan for the deep geological disposal of radioactive waste, management of medical exposure to ionising radiation, and exposure to radon.

ASN’s responsibilities in the field of regulation and oversight of nuclear safety and radiation protection, mean that forward planning is essential. The ASN Commission issued a number of strategic position statements in this respect in 2013...

The French electricity system must retain operational margins: ASN recalled “the importance of having sufficient margins in the electricity system to cope with the simultaneous suspension of operation of several reactors should they display a serious generic fault”.

Moreover, the current reactors will one day need to be finally shut down, for safety reasons. Preparations for this inevitable step must be made right now: ASN underlines “the need, in the short term, to make decisions relative to the electricity production capacities - whatever the production source - and energy savings, to prepare for the future final shutdowns of reactors for reasons of safety”.

From this viewpoint, ASN recalled that any operating life extension of the reactors beyond the fourth ten-yearly safety review was anything but a foregone conclusion. This milestone is particularly important as it corresponds to the theoretical operating life initially adopted for the estimation of ageing and for determining the safety approach. Operating life extension beyond the fourth periodic safety review means that several essential conditions must be met. Firstly, the equipment important for safety must continue to meet the requirements to which it is subject. This question is particularly important for ageing components and which cannot be replaced, such as the reactor vessel or the containment. The facilities must also be reassessed in the light of the most recent safety requirements which apply to the new generation of reactors, such as the EPR. Finally, the improvements requested further to the stress tests carried out after the Fukushima accident must be implemented. These led to technical prescriptions from ASN more specifically aimed at installing a “hardened safety core” of more robust safety equipment and emergency response teams able to intervene on the facilities impacted within a few hours. Implementation of this range of provisions will require exceptional mobilisation on the part of the indus trial firms concerned.

Developing European cooperation for management of a nuclear accident

At the European level, following the revision of the directive on basic radiation protection standards in 2013 and the probable adoption in 2014 of a new directive on nuclear safety, the management of a nuclear accident is a major topic on which progress needs to be made. In the same way as Chernobyl, the Fukushima accident showed that over and above all the safety measures designed to prevent such accidents and mitigate their consequences, preparations must be made at the international level to deal with large-scale, long-term emergencies.

In addition to the prime responsibility of the licensee for onsite management of a nuclear accident, ASN considers that exceptional emergency management provisions must be adopted in Europe, enabling the safety Authority of the country in which an accident were to occur to benefit from increased human resources. It is also essential, at the European level, to ensure that the steps taken to protect the populations following an accident are coherent and to ensure coordination between the Authorities responsible for these steps. Together with its European counterparts, ASN will aim to propose solutions and promote an operational organisation meeting these challenges.

The fate of high-level long-lived waste

The 2006 Act adopted the principle of deep geological disposal of high and intermediate level, long-lived waste (HLW/ILW-LL). The pertinence of this means of disposal with regard to the safety and radiation protection issues is recognised internationally.

ASN will not however be able to issue a position statement on any particular project until its safety has been conclusively demonstrated. In this respect, the characteristics of the site chosen and the inventory of waste to be accepted by the repository, will be decisive factors. This is why, in its opinion 2013-AV-0179 of 16th May 2013, ASN stressed that “the potential changes in the inventory must be presented to the stakeholders in worst-case scenarios, depending on the possible energy policy choices, more specifically concerning the question of the disposal of spent fuels”. In any case, ASN will ensure that the safety of the operation of HLW/ILW-LL waste disposal facilities is maintained for the long-term, to take account of the inevitable uncertainties regarding the time-frame for the actual availability of a deep geological disposal facility.

Managing the increase in doses delivered to medical imaging patients

The inspections carried out by ASN in the field of imaging, as well as the experience feedback from the events notified to it, highlighted shortcomings in the optimisation of practices. Progress in this field notably involves more detailed knowledge of the doses delivered, checks on the quality of the imaging equipment and an increase in the numbers of medical physicists.

Managing medical exposure to ionising radiation also involves rigorous implementation of the justification principle. This implementation implies greater use of best practices and wider access to magnetic resonance imaging (MRI) as an alternative to the use of scanners.

Radiotherapy is a key technique in cancer treatment, used in more than half of all treatments and with a high success rate (about 80%). Since the accidents at Épinal and Toulouse, radiotherapy has been the subject of reinforced monitoring by ASN.

In the field of radiotherapy, the pace of technological innovation is in fact outstripping that of the corresponding improvements in quality assurance. Operation of these increasingly complex machines requires competent teams comprising sufficient numbers of medical physicists and dosimetrists. Even if some progress has been achieved, the situation is still unsatisfactory when compared with other European countries.

ASN would therefore once again draw attention to the importance of the decisions to be taken in the health field to improve radiation protection in radiotherapy and medical imaging. The probability of an accident, which remains possible, is aggravated by the shortage of medical physicists, itself exacerbated by the lack of health professional status and a specific university curriculum.

Radon, a gas that can cause lung cancer, is a subject of considerable concern for ASN, because it makes a major contribution to the exposure of the French population to ionising radiation, albeit with significant local variations.

Within the framework of the health-environment plan, ASN today focuses on radon detection and mitigation, in other words, measures to reduce its concentration in establishments open to the public in the 31 French départements considered to be priorities owing to their radon emanation levels.

New regulatory guidelines will therefore need to be issued at interministerial level, to take account of these elements. ASN will submit proposals to significantly improve the protection of the population against radon-related risks.

In a context of restrictions in the 2014 Budget Act, ASN was particularly heartened by the budget efforts made, which enabled it to maintain its manpower levels, operating credits and expert appraisal capacity.

It would however underline the inevitable growth in the number of its long-term tasks, both for oversight of nuclear facilities (ageing, periodic safety reviews, follow-up to the Fukushima accident, etc.) and for radiation protection in the medical sector (increased use of ionising radiation for diagnosing and treating diseases), both of which are areas where the concerns of society have become more loudly heard in recent years.

At a time of considerable pressure to balance public finances, ASN considers that the means devoted to the regulation and oversight of nuclear safety and radiation protection can only be guaranteed for the long-term through an overhaul of its funding sources and by including the nuclear licensees, in complete transparency and under the control of Parliament.

Furthermore, ASN would like to see the range of its nuclear facility monitoring tools expanded with the implementation of a system of financial penalties in the event of a proven delay in the performance of the prescribed works.

For ASN, the regulation and oversight of nuclear safety and radiation protection is a major responsibility, which it strives to carry out in complete independence, with stringency, competence and transparency. ASN is therefore attentive to ensuring that its day to day activities are conducted without losing sight of the long-term objectives it has set for itself in the performance of the duties entrusted to it by law.